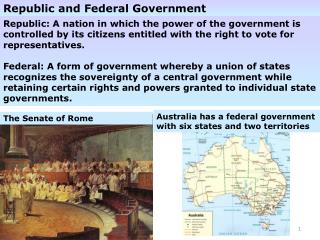 Republic and Federal Government. Republic: A nation in which the power of the government is controlled by its citizens entitled with the right to vote for representatives. Federal government - . concept of highway to federal funding. federal people and the highway. the government people with

Government and Federal Regulations - . by: tomas smaliorius &amp; ryan frazier. what is the first

Federal Government Supremacy - . the cardinal question. when talking about the relationship between the national

Charting federal and provincial government - . the federal overview. provincial executive. the cabinet. has authority to:

Government and the Federal Budget - . historical budget process. 1789-1921: congressional control on the budget mostly a

Federal Government Help - . in the civil rights movement. civil rights act of 1957. causes: ensure all had ability to