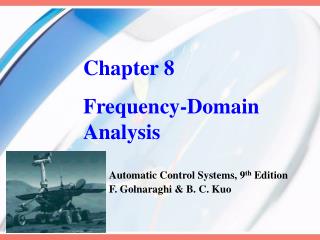 Chapter 3 The Laplace Transform and Its Applications to Circuit Analysis - . laplace transform (1). to a function f(t)

Applications of Frequency Domain Processing - . convolution in the frequency domain useful when the image is larger than

The good life in the frequency domain - . example: the fermi-pasta-ulam-tsingou experiment (the fft is everywhere)

Time vs. Frequency September 21, 1999 Ron Denton - . time domain vs. frequency domain. what is the time domain ? how is

Introduction to Frequency Domain Analysis (3 Classes) - Many thanks to steve hall, intel for the use of his slides

Chapter 10 - . sinusoidal steady-state analysis. steps to analyze ac circuit. transform the circuit to the phasor or

CIS 350 – 4 The FREQUENCY Domain - . dr. rolf lakaemper. some of these slides base on the textbook digital image

Frequency Domain Analysis/Synthesis - . concerned with the reproduction of the frequency spectrum within the speech