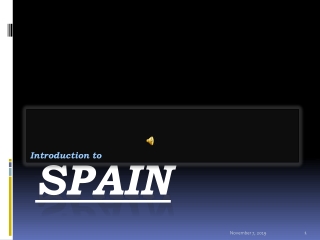 Introduction to. Spain. Spain. Spain is located between the Mediterranean Sea and the Atlantic Ocean, bordering France and Portugal. Spain is mainly a Spanish/Castilian speaking country, but also has other’s including Euskara , ect . The capital, Madrid, is located in the center of Spain.