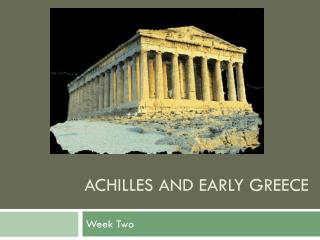 Early Greece - . by william. lesson1 the cycladic culture. there are 200 islands located east of the greek. the people

Early ancient Greece - . geography. ancient greece was a mountainous peninsula and had a hilly interior. mountains

Greece: Geography and Early Civilizations - . a . the physical geography of the aegean basin shaped the economic,

ACHILLES - The mightiest of the

Achilles - . jacob pacansky matt toro. the life and death of achilles. summary : achilles was the son of king peleus of

Early Civilizations In Greece - . chapter 4.1. the impact of geography. the mountains that divided greece led to a

Early Civilization in Greece - . let’s review the vocabulary from page 278 and the homework and practice book pages 75

Early Civilizations in Greece - . do now:. read page 106-107 in your textbooks and answer the reading check question on