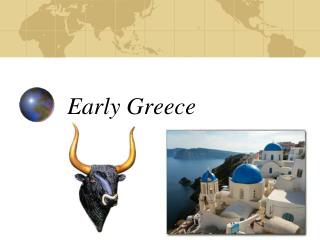 Early Greece. Minoan Civilization . Sir Arthur Evans discovered ancient ruins on the island of Crete in 1878. He named the civilization after the legendary tale of King Minos and the Minotaur . The Minoans were advanced in many ways, one included the use of indoor plumbing . . Early Greece - . by william. lesson1 the cycladic culture. there are 200 islands located east of the greek. the people

Early ancient Greece - . geography. ancient greece was a mountainous peninsula and had a hilly interior. mountains

Early Civilizations In Greece - . chapter 4.1. the impact of geography. the mountains that divided greece led to a

Early Civilization in Greece - . let’s review the vocabulary from page 278 and the homework and practice book pages 75

Early Civilizations in Greece - . do now:. read page 106-107 in your textbooks and answer the reading check question on

The Early Greeks Ancient Greece - . most of our study of ancient greece is focused on what we call the classical age. the

Greece: Geography and Early Civilizations - . a . the physical geography of the aegean basin shaped the economic,