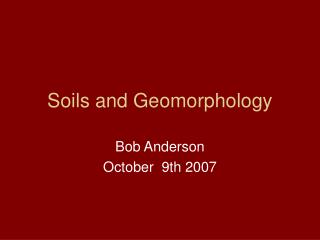 Soils and Geomorphology Bob Anderson October 9th 2007 Hillslopes Convex hilltops G. K. Gilbert’s view of a convex hilltop (1909) Need to address both the source of regolith and its transport. Both are climate-dependent. Regolith balance climate Q = -k dz/dx But climate and all

Geomorphology - . landforms of fluvial erosion . 1. waterfalls. what part of the river course would you expect to find

Modern Geomorphology - . in this lecture we consider hypothesis and test. some slides drawn by dr. tracy furutani. rather

Glacial geomorphology - . glacier: “a natural accumulation of ice that is in motion due to its own weight and slope of

Watershed Geomorphology - . motivation. effect of water on landscape: whereas hydrologists are mostly concerned with the

Process Geomorphology - . 9/20/2011. pattern to process, process to pattern. moral of the day. “process” occurs when