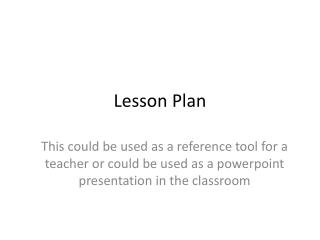 Lesson plan - . i found this a difficult lesson to do as many of my younger children will find meditating difficult. i am

LESSON PLAN - . class : viii. steps of lesson plan. name of the lesson number of periods required objectives of the

Lesson Plan - . using english and metric measurements note: it is suggested to teach this unit one category at a

Lesson Plan - . grade 9th-10 th hs-ls1-4. use a model to illustrate the role of cellular division (mitosis) and