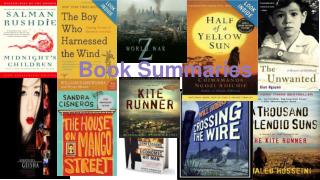 Book Summaries. The Unwanted: A Memoir of Childhood. Odyssey Book Summaries - . do now 3/26/14. take out odyssey book and notebook: answer: what is “voice” in reference

Summaries and Book Reports - . i. the