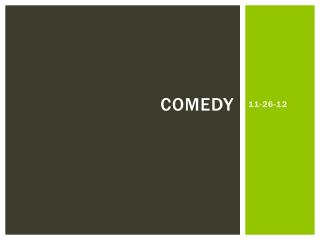 Comedy. 11-26-12. In your notes:. List out as many comedy movies that you enjoy watching Identify, what do they have in common? Analyze: What about them are funny? What qualifies as “funny”?. Define. Comedy films are "make ' em laugh" films designed to elicit laughter from the audience