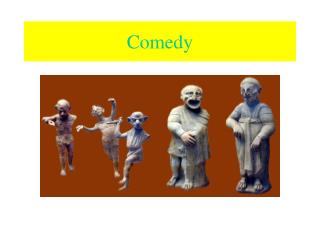 Comedy. Comedy. The word “comedy” comes from the Greek word Komos , or merrymaking, always part of the the Dionysian ritual. Comedies were popular during the Greece’s Golden Age of drama (5 th Century BCE). WHAT’S YOUR FAVORITE MOVIE??? - . movies soundtracks... ( musics from the movies ) what’s the name of the movie ?

THE COMEDY OF MANNERS - . home:. what is “commedy” comedy of manners in england the most important playwrights the

Oscar Wilde - . an irish writer and poet london's most popular playwrights in the early 1890s known for his humorous and

Comedy Genre - Jerusalem - . jez butterworth. theories of laughter. why do we laugh?. blake’s poem. explore it through

The Inferno - . part 1 of dante’s masterpiece: the divine comedy. church is source of sin reduce church control of

Romeo and Juliet - . chapter 14. background. romeo and juliet is the least aristotelian of the tragedies. it does end