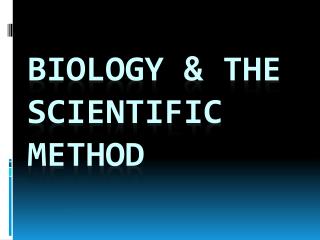 Biology & The Scientific Method. Science - an organized way of gathering and analyzing evidence about the natural world. . What is Biology?. Biology —a science that employs scientific methodology to study living things. It is the science, and study, of life. Psychology - . scientific study of the behavior of individuals and their mental processes scientific method-(set of

Scientific Method to the Rescue - Will the strongest towel please stand up! purpose to practice the skills used in

The Direct Method - The DM - . the direct method : outline. historical backgrounds the motivation the how? the pioneers

Welcome to Forensics - . mr. rizzo. what is forensics science?. use of the scientific method in the legal arena. the

3. Be able to critically read and evaluate the scientific literature. - Goals for mcb 5068. 1. obtain a solid foundation