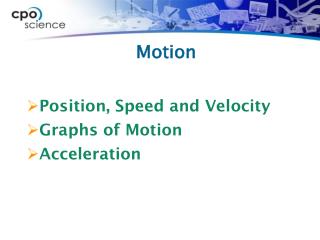 Motion. Position, Speed and Velocity Graphs of Motion Acceleration. Learning Goals. Explain the meaning of motion. Describe an object’s position relative to a reference point. Use the speed formula. Tell the difference between speed and velocity.