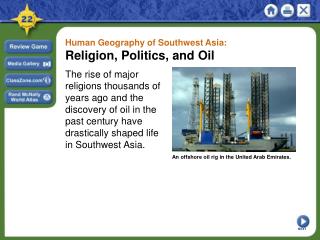 Human Geography of Southwest Asia: Religion, Politics, and Oil The rise of major religions thousands of years ago and the discovery of oil in the past century have drastically shaped life in Southwest Asia. An offshore oil rig in the United Arab Emirates. NEXT

Southeast Asia - . warm-up 4/7- what countries are part of southeast asia? . physical geography . one of the most

Human Geography of South Asia: A Region of Contrasts - Both south asia’s rich and ancient history, and its religious

Aim: How has geography affected human development? - . vocabulary: the bolded words in this slide show. where are we?.

Round 1 - . world geography russia reviewâ€”from mr. hodges of city of salem schools. the mountain range that

The Pueblo American Indians of the Southwest - . the pueblo indians were the indians of the southwest region. they are