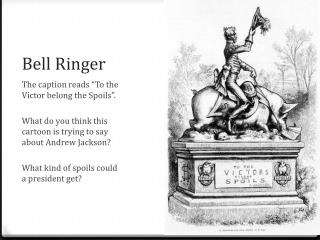 Bell Ringer. The caption reads “To the Victor belong the Spoils”. What do you think this cartoon is trying to say about Andrew Jackson? What kind of spoils could a president get?. Growth and Reform 1800-1850. Chapter 2. Democracy, Nationalism, and Sectionalism.