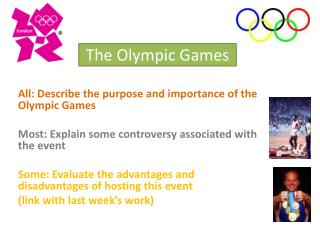 The Olympic Games. All: Describe the purpose and importance of the Olympic Games Most: Explain some controversy associated with the event Some: Evaluate the advantages and disadvantages of hosting this event ( link with last week’s work) . Fact or Fiction.