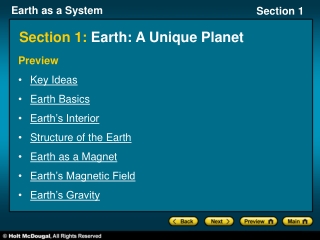 The Interior of the Earth - . by crystal mason. the layers of the earth. the

EARTH`S LAYERS - . inner core the inner core is solid because of all the heat and pressure. mantle the mantle is molten

The Earth s Shells - 2. you have probably learned in introduction to geology that the earth consists of concentric

Chapter 12 Earth s Interior - How do we gain knowledge about the interior of the earth?drill a well obtain actual

INTERIOR OF THE EARTH - . the earth comprises three layers the crust the mantle the core. it is the lightest and upper

Earth and its interior - . by: ross osborne. volcanoes/earthquakes. volcanoes are caused by convergent boundaries in the

THE EARTH´S SPHERE - . atmosphere. the atmosphere surrounds the earth and is the outer sphere. it is formed by a mixture

The Earth ’ s Atmosphere - . re-teaching assignment. the earth is surrounded by a “blanket” of air called the

The Interior of the Earth - . what exactly is in there?. of course we do not know for certain, but we are pretty sure the

Interior Layers of Earth - . the earth has three major layers:. 1 ) the core : consists of to two layers a) a solid inner