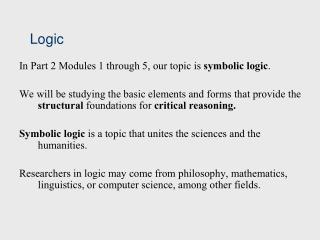 In Part 2 Modules 1 through 5, our topic is symbolic logic . We will be studying the basic elements and forms that provide the structural foundations for critical reasoning. Symbolic logic is a topic that unites the sciences and the humanities.

Logic Bombs - . what is a logic bomb?. a logic bomb is a piece of code intentionally inserted into a software system that

Logic - . what is logic?. logic is a system of rules for proving something is true, assuming other things are true. why

Logic - . logic is concerned with mechanizing reasoning logic is used to determine whether the truth of the conclusion

USE OF FUZZY LOGIC IN SOFTWARE ENGINEERING - . a.p.c. sudeera jayasekara. fuzzy logic is a form of approximate reasoning

Logic Bombs - . douglas smith david palmisano. what is a logic bomb?. a logic bomb is a piece of code intentionally