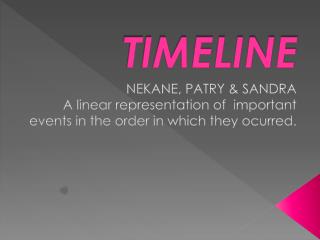 TIMELINE. NEKANE, PATRY & SANDRA A linear representation of important events in the order in which they ocurred . . PREHISTORIC . BC Iron age - Bronze age-Neolithic The iron age is the period generaly by ocurring after the bronze age marked by prevalent use of iron age .