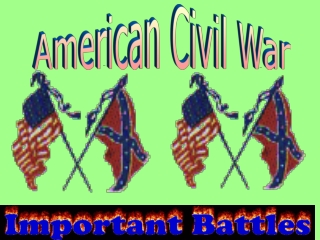 The American Dream - . a unit on civil liberties &amp; civil rights. the next two slides contain excerpts from

The American Civil War - . “war is cruelty. there is no use trying to reform it. the crueler it is, the sooner it will

Conflict &amp; Compromise - . what led to the american civil war?. a growing nation. in the period between the