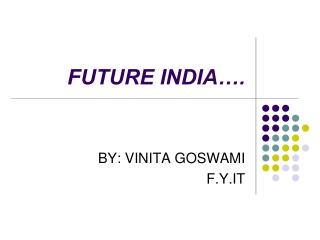 An overview of the IT-BPO sector in India By Rajeev Kumar Consul (Commercial) UNIBAN May 20, 2008 - Agenda 1. the rise

INDIA’S FUTURE - . r b roy choudhury memorial lecture mumbai. 29 january 2007. even though the world has just

Medical Mycology in India: past, present and future - . by h.c. gugnani, ph.d. frc. path. dr. b. r. ambedkar centre for

BOOK 3 UNIT 5 MY FUTURE By li Yanhong - . future. a riddle. what is always in front of you, but you can never see it?.

Future of career and careers of the future - . yehuda baruch norwich business school university of east anglia uk. a