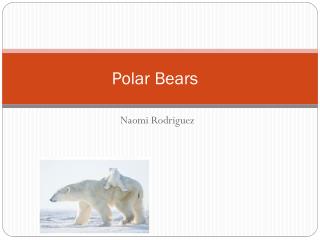 Polar Bears. Naomi Rodriguez. Background . Polar bears have lived in the arctic for many years.  Their bodies have adapted and developed in order for their survival in the polar region.  Polar bears are able to live in the deep freeze for many reasons. Polar bears - . by: megan smith . behavioral characteristics. they spend most of their times hunting seals and camping