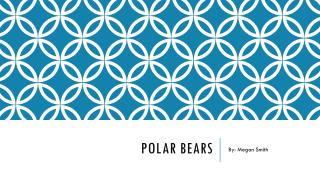 Polar bears. By: Megan Smith . Behavioral characteristics. They spend most of their times hunting seals and camping out next to a seal’s hole on the ice. Polar bears use their large front paws to push themselves through the water. They use their back paws to steer. Polar Bears - . naomi rodriguez. background . polar bears have lived in the arctic for many years.  their bodies have