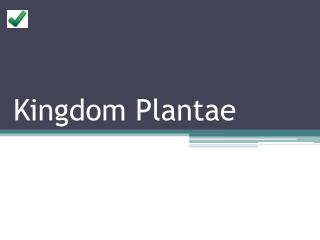 Kingdom Plantae. Some Basics. First appeared 500 million years ago Multi-cellular Eukaryotic Autotrophs – make their own food  because they are p hotosynthetic (contain chlorophyll ) Believed to have evolved from green algae

Kingdom Foundations: Who, What, When, Where, Why &amp; How The International Kingdom Institute - . dr. j.c. matthews

Hittites - . who were the hittites?. ancient anatolian people lived in modern day turkey and syria existed in 1750 bce.

Kingdom Protista - . diversity of protists. eukaryotic organisms that are not members of the kingdoms plantae, animalia,

The Plant Kingdom - . key features. multicellular photosynthetic alternation of generations- all plants have a

Examples: those, who hold the keys to the Kingdom: - Jim allchin , microsoft's windows chief said in oct 2005,” i'd

Kingdom Plantae - . national geographic - plants. kingdom plantae what are plants? most are autotrophs eukaryotic have