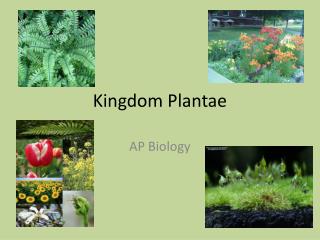 The Kingdom Protista - . chapter 20. what is a protist?. any organism that is not a plant, an animal, a fungus, or

Taxonomy – the 5 Kingdom System - . one of the purposes of taxonomy is to discover an organism’s phylogeny – or

Kingdom Protista - . key concepts. protists are a diverse group of eukaryotic organisms, most of which are microscopic.

The Millennial Kingdom Revelation 20:1-6 - . “what is heaven? “heaven is sort of big and they sit around playing

Kingdom Protista - . protists. 50 m. even a low-power microscope can reveal an astonishing menagerie of organisms in a

The Kingdom Plantae - . gaiser life science. know. what do you know about plants as a group?. “i don’t know

Kingdom Plantae - . introduction to plants. what is a plant?. plants: are multicellular eukaryotes have cell walls made

Kingdom Plantae - . they include familiar organisms such as trees, herbs, bushes, grasses, vines, ferns, mosses, and

Kingdom Plantae - . vascular plants – have vascular tissue – a system of interconnected tubes and vessels to