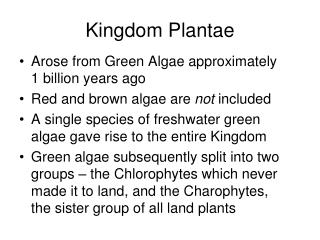 Kingdom Plantae. Arose from Green Algae approximately 1 billion years ago Red and brown algae are not included A single species of freshwater green algae gave rise to the entire Kingdom

MARINE BIOLOGY - . producers in the oceans. autotrophs - make their own organic compounds . can be done with

Kingdom Plantae - . the big five review. how many cells? what type of cell? cell wall or no? if so, what’s it made of?

Kingdom Plantae - . an evolutionary history of plants. life on earth: the first forests. complete the information on the