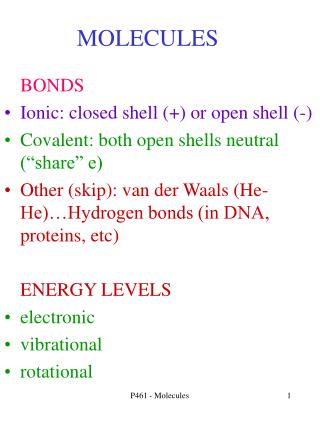 DNA and RNA - . dna. how do genes work? what are they made of, and how do they determine the characteristics of

Chapter 05 - . the structure and function of large biological molecules (macromolecules). figure 5.1 why do scientists

Chapter 5: What are the major types of organic molecules? - . polymers four major classes of biologically important

The Molecules of Life - . organic compounds. what does organic mean? no pesticides? environmentally friendly farming? in

The Backbone of Biological Molecules - . although cells are 70–95% water, the rest consists mostly of carbon-based

CHAPTER 2 - . chemical formulas &amp; composition stoichiometry. one drop of water is about 0.05g or 0.05 ml one drop

Jumpstart - Objective 04/22/2013 page 116. swbat review compounds and molecules to recall how they bond and their