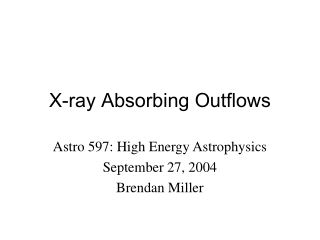 Outflows in Emission and Absorption: The SDSS Perspective - . gordon richards, john hopkins university. with thanks to

Most credit goes to : F. Tombesi, M.Giustini and G. Lanzuisi - X-raying winds and massive outflows in nearby and distant