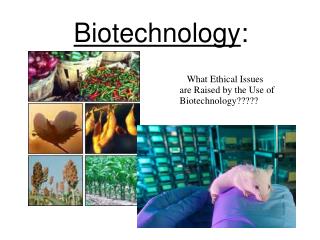 Biotechnology :. What Ethical Issues are Raised by the Use of Biotechnology?????. John & Elsa Case Study:. Run a Family Farm Possibility of Going out of Business Need to Decide Whether or Not to Use Bovine Growth Hormone . Concerned about if customers would still buy milk with BGH.