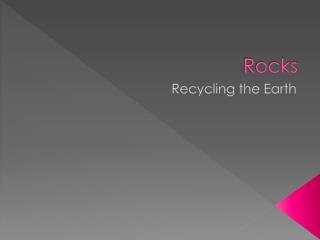 Rocks. Recycling the Earth. The Rock Cycle. Have you ever looked at a rock and wondered how it got there? Have you ever wondered what rocks are made of? http://www.schooltube.com/video/503ca205aae459f47494/The-Rock-Cycle. Three types of rock.