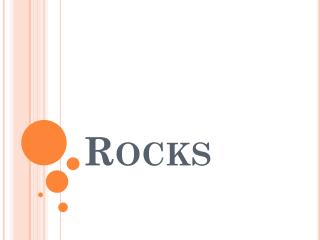 Rocks. Marble. Sandstone, Marble and Granite. Granite. Korean War Memorial is actually made from stainless steel….. But I really like it so I wanted to show it to you . Red Granite. I Will Be Able To…. Arrange and define 4 stages of sedimentary rock formation.

Sedimentary Rocks - . rocks made of bits &amp; pieces of other rocks. sedimentary rocks. igneous rocks are the most

Classifying Rocks - . s e c t i o n 5 - 1. objective. what characteristics are used to identify rocks? what are the three

Introduction to Rocks - . geology unit 2. what are rocks?. rocks are simply aggregates (combinations) of one or more

How Rocks Get Where They Get - . sedimentary rocks earth science. transportation &amp; deposition. for clastic rocks

Metamorphic Rocks - . metamorphic rocks. when rocks are baked by heat of molten magma or squeezed by the movements of