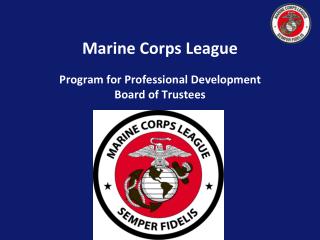 Marine Corps League. Program for Professional Development Board of Trustees. USMC - . past…. present…. future…. overview. establishment of the marine corps marine corps history missions of the

To lead untrained people to war is to throw them away. Confucius, circa 551-478 B.C. - Learn from the mistakes of others.

CASUALTY EVACUATION OPERATIONS - . purpose. the purpose of this briefing is to provide an overview of casualty evacuation

The Marine Realm - . morphology and processes. hypsography effect of eustatic and tectonic changes on land/sea