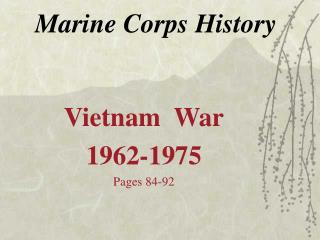 Marine Corps. - Marine corps. by kyle wilson. boot camp. there are 12 weeks of boot camp every week it gets harder

Marine Corps League - . program for professional development board of

The Marine Corps. - The marine corps. by brandon fehr. why i chose this. i chose this because i want to learn more about

Marine Corps League - . program for professional development. welcome. the training staff would like to thank all of you