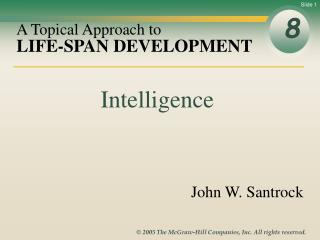 8. A Topical Approach to. LIFE-SPAN DEVELOPMENT. Intelligence. John W. Santrock. The Concept of Intelligence. What Is Intelligence?. Difficult to define because it is a complex concept that includes many different aspects Common definitions: Thinking skills Besides Christmas, what two holidays generate the most money in this country? - . halloween and valentine’s day. which

CHAPTER 9 LIFE-SPAN DEVELOPMENT - . physical and cognitive development in adolescence. 1. what is the nature of

Child Development Theories - . research has shown that early childhood may be the most important life stage for brain

LEADS/EMS ADVANCED CAL/SPAN INTERPRETATION - . review all of the automated tests that are conducted on calibrations and