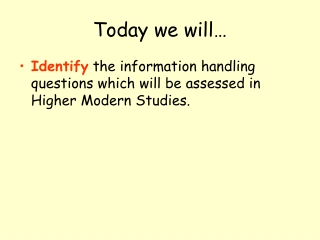 Today we will…. Identify the information handling questions which will be assessed in Higher Modern Studies. Success Criteria. Using sources I can make a judgement as to the extent of accuracy given to a statement. I can demonstrate how to answer this type of question. Objectivity.