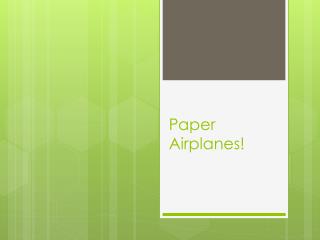 Paper Airplanes!. Rules. Make a paper air plane I will call on you If you answer it correctly, you have the opportunity to throw the airplane into the trash can If you make it, your team will receive 1 point! Let’s play!!. How to write a (hopefully good) paper by Martin Vetterli - . introduction to write well..... the structure of the paper

Finishing Up Your Paper &amp; Documentation/Citations - . research methods and data college of advancing

Linguistic Ecology - . today environmental isolation is no longer the linguistic force it once was inhospitable lands and

Chemistry 101 - . introduction. what is chemistry. chemistry is the study of matter and its changes. what is matter?.