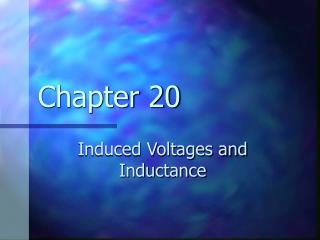 Chapter 20. Induced Voltages and Inductance. 20.1 Induced emf. A current can be produced by a changing magnetic field [ B = f ( t )], i.e., B varies over time First shown in an experiment by Michael Faraday A primary coil is connected to a battery Chapter 20 - . miscellaneous issues. learning from failure. technicians in an ambulance taking a heart attack victim to a

Chapter 20 - . great expectations - diggy simmons “they want me to fall, they wanna see if i make it. with my back

Chapter 20 - . the new south and trans-mississippi west. southern burden. industrialization as one way to restore

Chapter 20 - . amines. about the authors. these powerpoint lecture slides were created and prepared by professor william

Chapter 20 - . money, financial institutions, and the federal reserve. what is money?. something tangible that people

Chapter 20 - . girding for war: the north and the south. menace of secession. no war unless south started it can’t

Chapter 20 - . girding for war: the north and the south. seceding states (with dates and order of