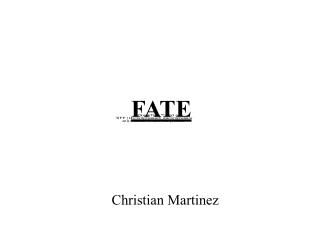 FATE. Christian Martinez. Background Information About FATE. Fate is the theory that everything happens just the way it is supposed to happen and all the things and events are predetermined Fate is when your life is all set up for you and you it follows a certain path. OEDIPUS REX: - . (oedipus the king) the first play in the theban trilogy and the model of greek tragedy. the audience

OEDIPUS REX: - . (oedipus the king) the first play in the theban trilogy and the model of greek tragedy. the audience

Repeating Fate’s Path - . asielus, the son of a fisherman, must find out his true identity and gain vengeance on an

Fate &amp; Free Will - . ancient greek beliefs and oedipus rex. concept of fate. fatalism is the system of belief

Hebrews: Fate or Freedom? - . john oakes, june, 2008. outline: overview of hebrews the history and the doctrine of

Fate vs. Luck - . this web quest is created by: ansha clement.

HFCs and Their Final Fate - . becky otter chemistry 481 february 3, 2005. what are hfcs?. hfcs or hydrofluorocarbons are

Ch 17--Fate of the Universe - . what do you think?. what is the universe? did the universe have a beginning? will the