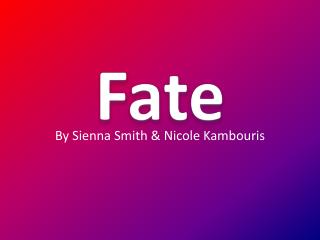 Fate. By Sienna Smith & Nicole Kambouris . Definition: Fate is the development of events outside a person’s control, regarded as predetermined by a supernatural power. Other words for Fate include: Destiny Fortune Outcome . fate - . “our hour is marked and no one can claim a moment of life beyond what fate has predestined.” napoleon, 19 th

FATE - . christian martinez. background information about fate. fate is the theory that everything happens just the way

The Fate - Ea. the fate. what is my sons fate ?. your son has a very trecherous fate in his future. he will kill you and

Fate Sealed?? - . fate sealed??. the opinions expressed in this show, are not mine. do not email me with comments or

Fate of Cells - . the developing embryo undergoes morphogenesis in order to create different tissues and organs through

Fate of comets - . sun. this “sun-grazing” comet was observed by the soho spacecraft a few hours before it passed

Fate and Love - . a compare and contrast analysis of “on seeing the 100% perfect girl one beautiful april morning”