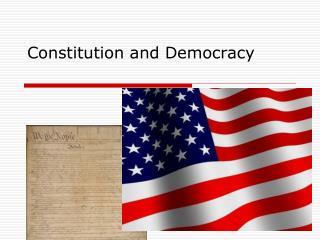 Democracy and the Constitution - . january 24, 2012. democracy in the world. what is democracy?. joseph schumpeter

The Constitution and Democracy - . princetonol.com. the preamble. key principles of government. founders did not intend

Democracy in The Constitution - . “we must take human nature as we find it. perfection falls not to the share of

Democracy and Participation - . what is democracy? democracy means “rule by the people.” democracy is based on two

Dictators and democracy - . lesson objectives look at and assess different forms of government looking in depth at a case