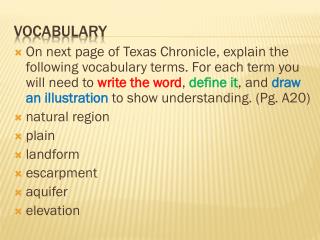 On next page of Texas Chronicle, explain the following vocabulary terms. For each term you will need to write the word , define it , and draw an illustration to show understanding. (Pg. A20) natural region plain landform escarpment aquifer elevation. Vocabulary.