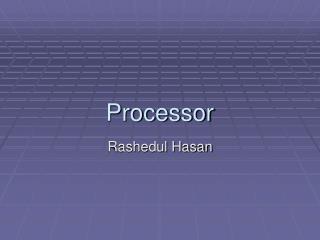 Processor. Rashedul Hasan. Processor. The microprocessor is sometimes referred to as the 'brain' of the personal computer, and is responsible for the processing of the instructions which make up computer software. . Processor. Processor - . a processor is the logic circuitry that responds to and processes the basic instructions that drive a