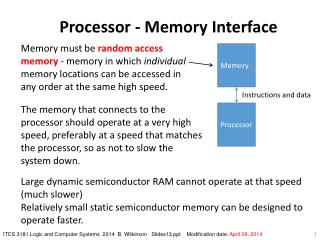 Processor - Memory Interface. Memory m ust be random access memory - memory in which individual memory locations can be accessed in any order at the same high speed. Memory. Instructions and data. Processor - . a processor is the logic circuitry that responds to and processes the basic instructions that drive a

Processor - . rashedul hasan. processor. the microprocessor is sometimes referred to as the 'brain' of the personal