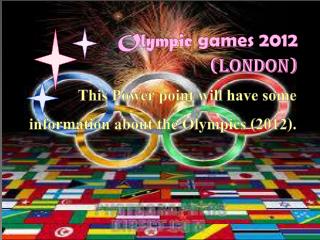 Olympic games 2012 (LONDON). This Power point will have some information about the Olympics (2012). Questions and Answers. 1. Who started the ancient Olympic games?

Welcome to London! - . london is a capital city of great britain. over 8 milion people live there. . london was founded

Jack London - . 1876-1916. jack london. the most successful writer in america in the early 20th century. his vigorous

What you can see in London - . in london you can see a lot of interesting things, like: - london’s eye -london’s

Introduction to AI in Computer Games - . hojjat jafary fanafzar game studio november 2012. what is ai. how do you think