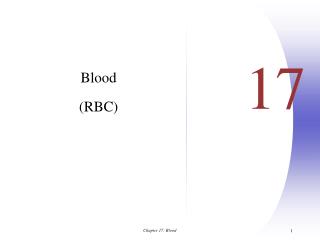 Blood (RBC). 17. Overview of Blood Circulation. Blood leaves the heart via arteries that branch repeatedly until they become capillaries Oxygen (O 2 ) and nutrients diffuse across capillary walls and enter tissues Carbon dioxide (CO 2 ) and wastes move from tissues into the blood.

Blood - . blood. blood is not an epithelial tissue, and it’s not loose or dense connective tissue; it’s classified as

ANEMIA IN PEDIATRICS - . anaemia is defined as a low hb concentration in blood, or less often, as a low haematocrit, the

Blood Smear - . this peripheral blood smear from a patient with essential thrombocythemia shows increased numbers of

Hematocrit - . hematocrit is the percentage of whole blood which is composed of solid material cells, platelets etc the

BLOOD COMPONENT PREPARATION - . this presentation will enable participants to understand the basic principles and

Blood Vessels - . p a r t a. blood vessels and circulation. blood is carried in a closed system of vessels that begins

Blood - . blood. blood is not an epithelial tissue, and it’s not loose or dense connective tissue; it’s classified as