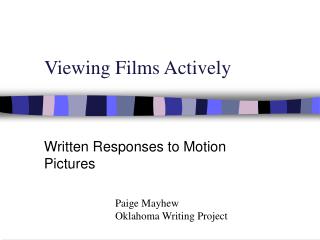 Viewing Films Actively. Written Responses to Motion Pictures. Paige Mayhew Oklahoma Writing Project. “The schools do not have the power to change public acceptance of the visual media. Training students to understand and use them would be far more productive Viewing Films - . lesson 4. objective. understand how the ways we view films have changed over the last 100 years assess

Reading Actively - . joining the conversation. general questions for effective reading. do you like the piece? what do

Viewing - . chapter 5. introduction: we have completed our discussion of the first half of the synthetic camera model

Viewing - . how to see the object type of object view how to set the view for cg the shadow creating. type of views

Viewing - Cs 234 day 6 jeff parker. viewing. objectives. perspective what it looks like how we make it happen the