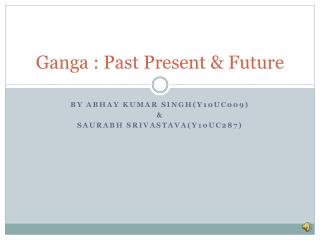 Ganga : Past Present & Future. By Abhay Kumar Singh(y10uc009) & Saurabh srivastava(y10uc287) . Have A Look To These Pictures. A Comparison. Past Internet of Things (IoT) Past, Present, and Future - A look at the state of the internet of things in the world today.

Muslim Ummah : Its Role, Past, Present and Future, Challenges and Opportunities - . questions appeared in previous years.

1964 Gene’s Comment – a true story - Past, present and future of earthquake analysis of structures by ed wilson draft

The past and the Future To Continue, Click  - . student objectives. students become familiar with basic characters,

Insurance Regulatory Modernization and Industry Performance Past, Present and Future - . the forum of greater new york