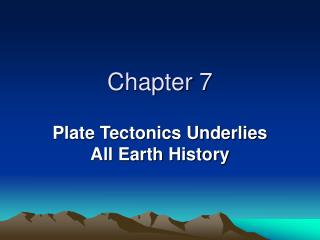 Chapter 7. Plate Tectonics Underlies All Earth History. Earthquakes. Earthquake = vibration of the Earth produced by the rapid release of energy. Seismic Waves. Focus = the place within the Earth where the rock breaks, producing an earthquake.