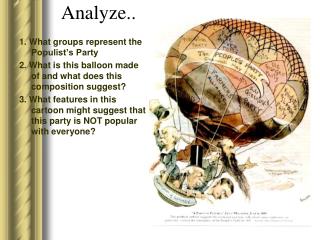 Analyze. 1. What groups represent the Populist’s Party 2. What is this balloon made of and what does this composition suggest? 3. What features in this cartoon might suggest that this party is NOT popular with everyone?. p. 2 POPULIST PARTY IS BORN.