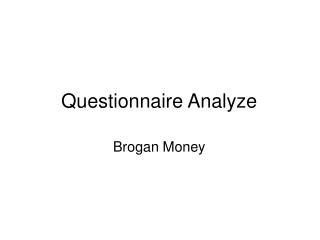 Questionnaire - . personality. enduring patterns of perceiving, relating to, and thinking about the environment and

Questionnaire - . personality. enduring patterns of perceiving, relating to, and thinking about the environment and

Questionnaire… - . complete the questionnaire. who do you think you would have been the suffragists or the

Questionnaire - . think about what you’d fill out if asked… what incentive is there to fill it out? as the company,

Questionnaire - . why use questionnaires?. to collect information about a given population in a structured way so that