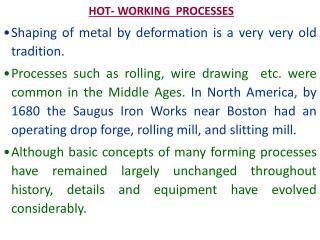 HOT- WORKING PROCESSES. Shaping of metal by deformation is a very very old tradition. Processes such as rolling, wire drawing etc. were common in the Middle Ages. In North America, by 1680 the Saugus Iron Works near Boston had an operating drop forge, rolling mill, and slitting mill. Coastal Processes - . lesson 1. lesson aims: what is the coast? what is meant by a coastal system? what are the inputs,

Chapter 6 Processes and Operating Systems - . 金仲達教授 清華大學資訊工程學系 (slides are taken from the

Process management - . what are we going to learn? processes : concept of processes, process scheduling, co-operating

Financial Market Know how - . this session will help you understand. the component and structure of financial market. the

Working Stage of a Group - . key points of the working stageno arbitrary dividing lines between each stagegroup